Archbishop of Canterbury acknowledges Isaiah did not say “virgin”

During an interview in December 2007 the Archbishop of Canterbury, Dr Rowan Williams, was asked about the prophecy in Isaiah 7:14. This is the prophecy that has been used as the foundation stone of the virgin birth doctrine, and until the finding of the Dead Sea Scrolls was shown in our Bibles as saying a “virgin” shall conceive.

Therefore the Lord himself shall give you a sign; Behold, a virgin shall conceive, and bear a son, and shall call his name Immanuel.  (KJV)

The Archbishop acknowledged that “the original Hebrew doesn’t have the word virgin, it’s just a young woman”. He went on to make the claim that the Gospel of Matthew quoted the prophecy from a Greek translation which used the word “virgin”. Here is part of the interview:

SM: Christopher Hitchens and many others make the point that isn’t the translation for young woman rather than virgin? Does it have to be seen as virgin; might it be a mistranslation?

ABC: It is… well, what’s happening there one of the gospels quotes a prophecy that a virgin will conceive a child. Now the original Hebrew doesn’t have the word virgin, it’s just a young woman, but that’s the prophecy that’s quoted from the Old Testament in support of the story which is, in any case, about a birth without a human father, so it’s not that it rests on mistranslation; St Matthew’s gone to his Greek version of the bible and said “Oh, ‘virgin’; sounds like the story I know,” and put it in.

The translation to which the Archbishop referred is known as the Septuagint, and came into being about 500 years after Isaiah had died. It mistranslated the Hebrew word for “young woman” as “virgin”.

In the final analysis, the Archbishop’s position is that the “virgin birth prophecy” is not derived from the Old Testament, but from a mistranslation of the Old Testament made centuries later.

For a detailed analysis of Matthew’s quotation of Isaiah’s Prophecy go to Isaiah’s prophecy. 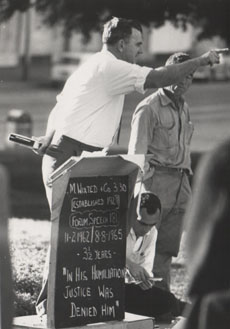 He delivered this message for eighteen years in the thrust and parry of the public forum that operated in Brisbane from 1962 to 1980.

His subjects ranged from the theological debris with which the churches have surrounded Jesus of Nazareth, to the unholy trinity of priests, press, and politicians who were responsible for the Vietnam War.

The Brisbane Public Forum was a place where issues were vigorously debated. Status counted for nothing. Speakers and interjectors sank or swam according to what they had to say, and their ability to say it. It was a place where issues could be — and were — dramatised, making an impact far beyond what the written word could do. There was no more effective speaker in this setting than Ted Wixted.

At that time, the media, churches and other establishment organizations were able to censor information more effectively than they can today. However they could not exercise this power in a place where there was direct communication between the speaker and his audience. The Brisbane Public Forum provided Ted with a platform to speak in detail about the nature of the political / religious Establishment and its manipulation of the truth.

How much of a threat such a man could be to the Establishment depended not only on that man’s ability and the information that he conveyed, but also on whether or not his message could be contained. The activity of certain groups towards containing the message is another story for another time. It is enough to say here that the media and the Police Special Branch play prominent roles in that story.

So far as containing information is concerned, we now live in a different world to that of only a few decades ago. The Internet has seen to that.

During his period at the Brisbane Public Forum Ted issued numbered pamphlets, which documented the issues involved. The nature and purpose of his work is evident in these pamphlets, and they will be added to this website in due course.

With the expectation that the issues raised in the pamphlets will be resolved, one point should be stated clearly. The media was fully informed at the time about the issues discussed at the Brisbane Public Forum. That which the media chose to ignore then cannot become some sort of new discovery in 2007, or later …

The Public Forum operated at Centenary Place, Brisbane, Australia from 1962 to 1980. It was a place of vigorous, intellectual debate for many of those years until external factors led to its gradual diminution. 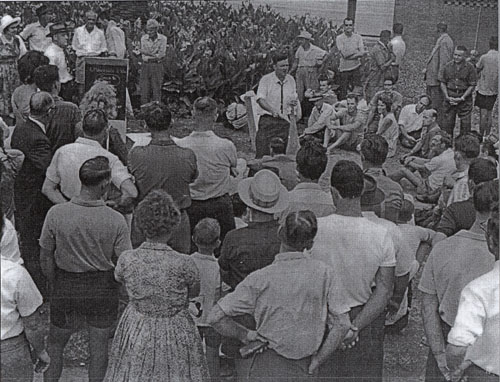 This photo catches the atmosphere of the Forum for much of its first ten years.

Viewed in historical perspective, scenes such as this are as much biblical as any scene that took place in bible days. It depicts a direct and fundamental form of communication as old as time.